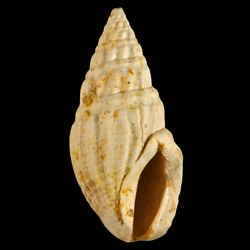 "Shell rather large and commonly stout, somewhat bucciniform. Whorls between 9 and 10 in all, those of the conch 7. Nucleus small, very smooth and shining, probably thrice coiled, although the very tip is slightly decorticated, so that the exact number is not determinable. Whorls of conch rudely trapezoidal, increasing rather rapidly in size; body whorl gently contracted at the base; both axial and spiral ornamentation developed, the former dominant. Axials on early whorls more or less undulatory, 10 or 12, increasing to 15 on the later and much narrower relatively and more acute, persisting with uniform strength from the fasciole to the anterior suture and well down to the base of the body but more or less irregular in size and spacing on the final half turn. Spiral sculpture very obscure upon the spire and restricted to the intercostal areas; 4 exceedingly obscure fillets upon the later whorls of the spire and 12 upon the body, those upon the anterior and medial portions very vague; spirals much stronger toward the base. Anterior fasciole closely threaded with about 6 lirae. Posterior fasciole appearing as a rather broad, shallow channel, sharply delimited behind by the posterior cord and in front by the abrupt terminations of the axial ribs, devoid of any sculpture except feeble incrementals; posterior cord rather low and ill defined, feebly nodulated by the costae of the preceding volution. Suture line impressed, undulated. Aperture rather broad and a little oblique. Outer lip expanding incrementally only, more or less varicose behind the margin, acute and commonly feebly crenulated at the margin itself, smooth within. Parietal wall heavily glazed, a feeble sulcus developed at the posterior commissure. Posterior siphonal notch rather deep, symmetrically disposed between the suture and the outer margin of the fasciole. Anterior canal moderately long for the genus, broad and open. Anterior fasciole short but rather wide and rather deeply emarginate.

Clavatula polyploka suggests a stout and coarsely sculptured C. grabaui Maury. There are, however, differences in the details of the sculpture which readily separate the two species. The axials of the former are broader, more elevated, less numerous, and much more abruptly evanescent posteriorly; the spirals on the later whorls are only about half as many. The fasciole of C. polyploka is sharply defined and smooth except for incremental striae; that of C. grabaui is obscurely delimited and finely lirate.

The species is rare even within the small area in which it has been recognized."