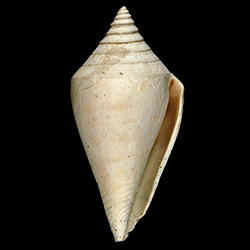 "Shell biconical, robust, spire elevated, slightly turrited, acuminate, sides slightly concave; whorls eleven, upper surface sloping, straight, margin angular; body whorl flat on the sides, marked by four or five oblique, revolving, impressed lines in advance; aperture narrow, linear, sides straight, biangular posteriorly; outer lip acute, prominent in the middle, notched above the angle. Colors reddish yellow with a clouded band of white, in confluent patches a little in advance of the middle, and on and near the angle of the whorl; the posterior or top surfaces of all the whorls are more or less white; above and below the angle are darker spots, a deeper shade of the body color, irregularly disposed both on the white and yellow ground.

Remarks. — Mr. Conrad, who presented the present specimen to the Academy, and who has collected shells at Tampa Bay, informs me that he has seen two specimens of this shell. The first was found during his visit to Florida, the other, the present one, was discovered by him in a miscellaneous lot of shells recently brought from Tampa Bay.

In general appearance this species is not unlike C. Delessertii, Recluz, Mag. de Zool., 1863, p. 72; Kiener's Monog., p. 156, pl. 53, fig. 2, but it differs from that species in being more slender, and in having all of the outlines straight instead of being slightly sinuous. In Delessertii the tops of the volutions are concave and the angles are rounded; in the present species the tops of the volutions are flat and sloping, and the angles are sharp. In the former species the body whorl is slightly convex above and faintly concave in advance; in the present one the sides are bounded by straight lines. A difference also exists in the color. In the former the surface is covered by three reddish bands and three light ones, besides a light color on the angle. Over the darker bands are still darker, irregularly elongated, sharply defined patches, while on the lighter bands are smaller, but equally dark spots. In our species there is but a single light band on the middle, or rather a continuation of light, irregular cloudings on a yellowish ground, and a similar light coloration on the angle, and near the angle a few small dark spots, shaded into the general ground color of the shell. In the height and concave outline of the spire, the two species are about alike."