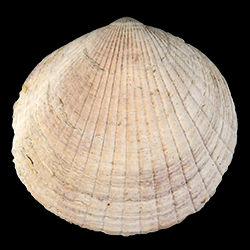 Description. Shell increasing in width by a slightly curved line from the apex to beyond the middle: lateral curvatures equal: apices separate, small, central; intervening space with but little obliquity to the plane of the shell, with obsolete angulated lines: teeth forming a regularly and much arcuated series, which is rectilinearly truncated above so as to leave in that part a mere edentulous elevated line: within destitute of striae: margin with elevated angular lines: exterior surface with about thirty longitudinal, impressed, acute lines, the intervals a little convex.

The character of the interval between the beaks is not unlike that of a Cucullaea, but the arrangement of the teeth does not correspond with the definition of that genus.

This shell varies a little in form, being sometimes nearly orbicular."