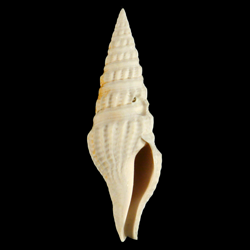 Note that occurrence of species in the Late Pliocene Jackson Bluff Fm. is based on a single specimen (UF 69046).

"Shell elongated, resembling in form the recent Drillia ostrearum, Stearns. Spire acute, nuclear whorls two, subsequent whorls seven, of which the two earlier show well-marked transverse ribs, but little or no spiral sculpture; spirals on the later whorls stronger, consisting of primaries with alternating finer, secondary threads in pairs; transverse ribs stronger and more numerous on the later whorls (twenty-five on the last) and more sharply defined; the intersecting ribs and spirals form a beautiful cancellation ornamenting the whorls up to the margin of the groove, where the ribs end abruptly; in the groove lines of growth and fine, sub-equal spirals form the only sculpture; upper margin of the groove marked by a sharp carination sloping steeply to the suture; aperture narrow with a smooth callus.

This very beautiful species is characterised by the delicacy and elegance of its sculpture.