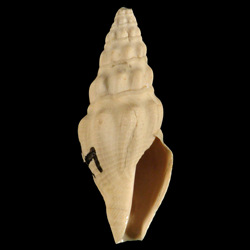 "Shell resembling D. Grabaui but much larger and stronger. Whorls without the nucleus, which is eroded in the single specimen found, eight; spiral sculpture of sub-equal, shallow, narrow grooves extending from the notch to the base of the whorls; subsutural band very slightly nodular; transverse sculpture of fairly distinct ribs (thirteen on the last whorl) which become weaker and tend to fade out on the last whorl. The ribs extend from the notch to the succeeding suture and to about the center of the body-whorl. Notch distinct, broadly U-shaped; canal short, wide; aperture rather narrow; outer lip not lirate within; pillar with a rather thick callus. Length of shell 41; of aperture 18; greatest width 21 mm.

Named in honor of Professor Stanislaus-Meunier of the Jardin des Plantes, Paris."