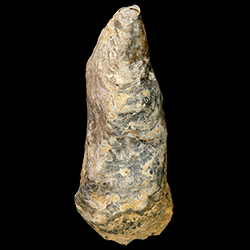 It is not unlikely that to the above synonymy should be added O. veleniana Conrad (a typographical error for heleniana) of the Mexican Boundary Report, 1857, and the unrecognizable O. panzana and O. robusta Conrad, 1857.

The O. Tryoni Gabb (1881), from the Miocene of Costa Rica, appears to be a well-characterized species.

The young O. georgiana Conrad is the characteristic fossil of the Upper Oligocene of the Gulf States often found in northern Florida scattered over the surface of the Vicksburg limestone from which the Upper Oligocene marl has been dissolved away. It is the 'leit fossil' of the Grand Gulf beds, though not confined to them, and occurs in the single meagerly fossiliferous bed below the Altamaha grits. The specimens are usually in poor condition superficially, having the exterior and often the interior vermiculately eroded. It occurs but rarely in the true Miocene, where it seems to become modified into the early type of O. virginica, which is not improbably its direct descendant. In old Post-Pliocene beds or oyster reefs it is not uncommon to find enormously thickened senile specimens of O. virginica which present many of the features of the Oligocene O. georgiana."

* Note: Dall's original description reported this taxon from an offensively-named fossil locality near Newnansville, FL. While this locality name has been removed here, the reader may access Dall's description by clicking the link above.