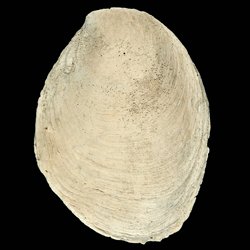 "Shell depressed, flat, oblong oval, transversely wrinkled, lateral margins abruptly deflected; apex not prominent, and constituting a mere terminal angle, obsolete in the old shells; within white; diaphragm occupying half the length of the shell, convex, contracted in the middle and at one side.

A remarkably distinct species, the surface of the shell is flat, and sometimes slightly concave. The young shell is generally orbicular, and gradually becomes proportionally more elongated as it increases in size. I have found it on the coasts of Maryland, Carolina, Georgia and East Florida, and my brother, Mr. Benjamin Say, discovered it on the shores of New Jersey."