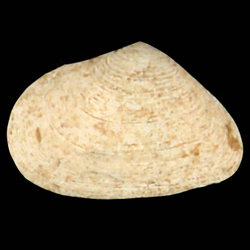 Observations. I found a specimen of this shell between the laminae of the Chama corticosa, where it had evidently resided when living. Like the Saxicavae, and other lithophagous bivalves, it is irregular and variable in outline. In a recent state this species inhabits the coast of Rhode Island, and has been found as far south as Florida, but is very rare on the immediate coasts. I obtained a single valve on the beach of Sullivan's Island, near Charleston, South Carolina."