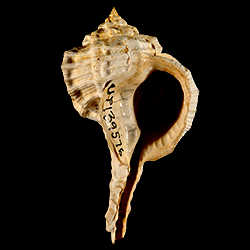 "Shell small, pyriform, compact, resembling in shape young specimens of M. messorius Sowerby of the Pliocene and recent faunas. Whorls about six, the nuclear nearly smooth, the three later whorls bearing each seven varices. On the body whorl the varices are prominent, rounded, somewhat broader than the interspaces. The varices of the shell form nearly continuous, sinuous lines from near the apex to the base of the canal. Spiral sculpture of raised lines of which groups of two or three are much stronger and stand out prominently from among alternating feebler spirals. Outer lip with about ten strong internal lirae; aperture oval; canal not quite half the length of the shell. Length of the shell 22.5; greatest width 14 mm.