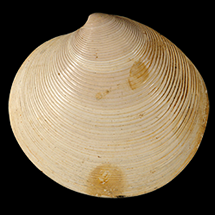 "Artemis elegans, Conrad; rare. Mullet Key. -- A. concentrica, Lam.; common. This and the preceeding species have probably been regarded as identical, but in every stage of growth there is a uniform and marked difference; the former species being more orbicular and convex, and having much more remote and distinct grooves, a character as obvious on the young shells as on the adults. It is much the rarest of the two species, and occurs fossil in the Miocene of North Carolina."