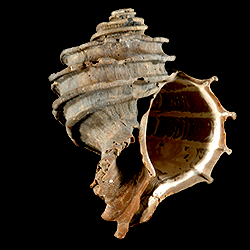 "Ovate-ventricose; with a dilated umbilicus, and four much elevated belts, which are more dilated at their tops.

Description. Spire short, the volutions with but two belts, the others being concealed by the succeeding whorls: body whorl with four belts, which are equidistant, much elevated, wider at top than at the junction with the whorl, and with one or two deeply impressed lines; intervening spaces wrinkled, the wrinkles extending over the belts: aperture suboval: canal short and contracted: labrum with a groove corresponding with each of the exterior ribs: umbilicus dilated, large, not visibly penetrating to the inner summit; the exterior margin prominent and deeply dentated.

Varies much in size; the smallest in Mr. Finch's collection is about three-fifths of an inch wide, another is rather more than one inch in width, and the largest is nearly three inches and three fourths; but a fragment of a still larger one leads me to believe that the species attained to a width of more than four inches. I am unable to state the proportional length, all the specimens having truncated spires. The belts of some young specimens are altogether destitute of the impressed lines.

It seems hardly possible that Lister's figure 2, of plate 1059, was intended for this shell, although it has certainly a general similarity in the ribbed appearance of the figure, and notwithstanding the locality "a Marylandia," which is engraved with it, inasmuch as there is not any appearance whatever of an umbilicus, which is so much dilated and so remarkable in the species under consideration.

Lister's figure is quoted by several authors amongst the synonymes of Buccinum scala, and considered as a variety of that shell, which may perhaps be correct; but in that case the fact of such a shell having been found in Maryland, is at least doubtful. Our shell may be the same with the species which Dillwyn informs us is mentioned in the Portland Catalogue, lot 3516.

A fine specimen of this shell was sent me some time since by Mr. Stephen Elliott of Charleston, who informed me that it was found with other interesting and perfect shells which accompanied it, on the Santee river, a little below the junction of the Congaree and Wateree rivers."