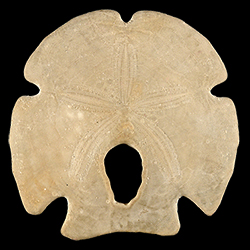 "In the report by Cooke and Mossom I referred this form to Encope macrophora Ravenel, but I now believe, after more study, that it represents a new subspecies of E. macrophora.

E. macrophora tamiamiensis appears to be an intermediate form between E. macrophora and E. grandis (L. Agassiz). It differs from E. macrophora in having a proportionately wider and thinner test, a concave instead of convex posterior margin, and a much smaller interambulacral lunule. It differs from E. grandis, a Recent species reported by A. Agassiz to occur in the Gulf of California, in having in general a shallower anterior marginal notch and less incised lateral marginal notches. The posterior margin on both forms is very similar in the degree of convexity, indicating a close relationship.

The test of the new subspecies is usually wider than long, rather thin, but not having sharp edges. The region directly in front of the lunule is the thickest part of the test. The lunule is elliptical and is surrounded on its upper surface by a raised border.