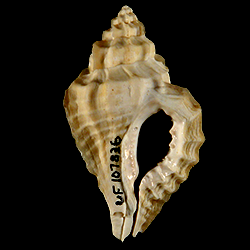 "Shell pale reddish-brown, cancellate with eleven robust costa to the body whirl, and several revolving filiform lines passing over them, which are more prominent upon the varice of the aperture, terminate at its inner edge, and there alternate with the raised lines of the fauces; volutions flattened at their summits, abruptly declining to the suture; canal coarctate, rather longer than the spire: leak rectilinear, reflected at the tip.

A rather common species.

This generic name I think objectionable, inasmuch as it borders too closely upon Renilla, which designates a genus of the class Polypi of Lamarck. Montfort's appellation Buffo is not preferable for a similar reason, as it would be liable to be confounded with Bufo, a genus of Reptilia."