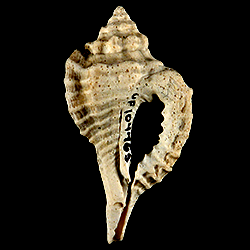 "Fossil in the upper bed at Alum Bluff, Florida, and (var. intermedia) very rare in the Caloosahatchie Pliocene."

"Shell of moderate size, six-whorled beside the (lost) nucleus; spiral sculpture of (on the last whorl about nine) large, feeble, revolving, flattened threads, with much wider interspaces and a very fine, often obsolete, spiral striation covering the surface; transverse sculpture of about eight stout, not very sharply defined, moderately elevated ribs, which begin at the shoulder and extend over the whorl, disappearing near the canal; the spirals overrun but do not nodulate them; the last whorl has two varices, thickened more prominently than the ribs, but not sharp-edged or spiny except for a single blunt point occasionally developed at the shoulder; the primary spirals exist on the anterior face of the last varix as elevated ridges crossed by sharp incremental lines and not as grooves, as in the more modern species; there are three ribs in front and four behind between the varices; canal not long, slightly recurved; aperture elongate, pointed before and behind; inner lip elevated, with a smooth edge, the surface slightly granulated in old specimens; body callous, with a subsutural ridge; outer lip with six teeth in front of the shoulder angle; whorls rather full, appressed to the suture and undulated by it, rising at the varices, somewhat constricted in front of the suture, the excavation extending to the shoulder; spire rather short; early whorls smoother, with the ribs more prominent. Max. Ion. of shell 29.0; of aperture and canal 20.0; max. lat. of shell 14.5; of aperture 5.5 mm."

"This form is immediately distinguishable from the more modern ones by its smoother surface, less prominent varices, and especially by the way in which the whorl is constricted and appressed in front of the suture, which is thus made less even and less obvious. The fine secondary striation and the absence of any sharp edges are notable features.

There is a marked change between the Miocene form and its representative in the Caloosahatchie Pliocene. The high, appressed, smooth shoulder is shorter, and its slope at a greater angle with the axis. There are no sharp edges, and the specimens I have seen practically have but one varix. The spirals are more numerous and the secondary ones coarser; the transverse ribs more numerous, reaching ten beside the varix. The shell is almost exactly intermediate between the Miocene species and the true caudata of the more northern Pliocene and recent fauna. For this variety I propose the name of intermedia.

Simultaneously with the above modification of the ancient stock, we find the present southern variety sulcideiitata present in the marls; so the condition which in intermedia preserved the rounded sculpture, was not unfavorable to the development of sharp laminae in others. Perhaps the difference was really one of local habitat, as we find at present between the smoother and the spinose Melongena—a surmise which the condition of the marl-beds does not permit us to verify or reject by observation."