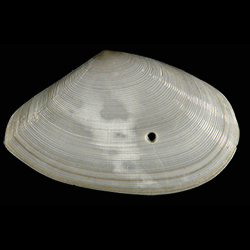 "Shell compressed, oblong, narrowed and angulated before, white; numerous parallel, equal, equidistant, impressed concentric lines, which on the anterior margin are alternately obsolete; interstitial spaces flat; within tinged with yellow, a callous line, which is sometimes obsolete, passes from behind the hinge to the inner margin of the posterior cicatrix, and another from before the hinge to the inner margin of the anterior cicatrix; anterior hinge tooth emarginate; posterior lamellar tooth very near the cardinal teeth, so as to appear like a primary tooth, that of the right valve wanting; anterior lamellar tooth at the extremity of the ligament; anterior hinge slope declining in a somewhat concave line to an obliquely truncated tip.

Length one inch and one-fourth.

Thickness two-fifths of an inch.

Inhabits the coast of Georgia and East Florida.

Rather a common shell, beautifully and very regularly striated. When cast upon the beach, one of the valves is very commonly perforated near the hinge; this operation, it would seem, is most frequently performed upon the left valve, as, of ten specimens thus mutilated, I have but two with the perforation upon the right valve. It varies in being destitute of the yellow colour within. It is probably allied to T. punicea, but I have never found it so far north as the coast of New Jersey. It is much more elongated than the latter, the striae are far more distinct, and it is entirely and always destitute of the rose-coloured bands, and lines, such as are represented in Horn's figure of that shell. It cannot be the T. angulosa of Gmel., as that species is described to be suborbicular, and to have the lateral teeth remote, whereas the alternata has but one of the lateral teeth remote."