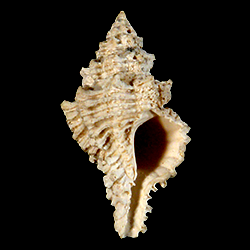 "Nucleus of holotype imperfect, whorls about seven; suture well impressed; spiral sculpture consisting upon the body whorl of about twelve rounded ribs, arranged arc shaped from axial rib to rib, often marked with a division line in the center, the major termination of the axial sculpture turned backward from the direction of growth, openings beneath away from the recurved points. The eight axial eminences are sharp and largely formed by foliated processes. Aperture small, oval in shape; canal slightly oblique, almost closed. Length of holotype 26 mm., in the author's collection.