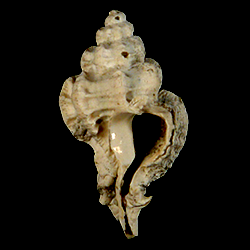 Aperture somewhat more than half the length of shell, key-hole shaped, with the canal broadly deflected. Length nearly .75 inch.

A single specimen from Ayres' pits, near Shiloh, in the possession of Miss Emma Walter, of Philadelphia"