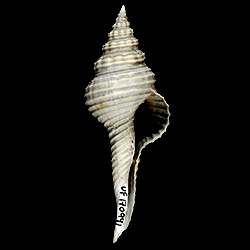 "Shell typically fusiform, of about ten volutions; spire acuminate, about one-third the length of shell, with a slightly papillate apex; whorls sub-angular, longitudinally ribbed, and crossed by somewhat distantly-placed, elevated, revolving lines, the median two of which on the whorls above the body-whorl appear more developed than the others.

Body-whorl with about nine revolving lines, the two on the shoulder, with occasional intermediate finer lines, least prominent; aperture semioval, with a long, nearly straight canal, of about twice its own length, the two combined considerably more than one-half the length of the entire shell; outer lip thin, striated internally.

This shell most nearly resembles among living forms Fusus Dupetit-Thouarsi, but differs from it in its subangular whorls (evenly convex in the latter), and the absence of the numerous lines on the shoulders. In the first of these characters, as well as in the smaller number of revolving lines, it also differs from the closely resembling Fusus Henekeni of Sowerby, a common Miocene fossil of the West Indies."