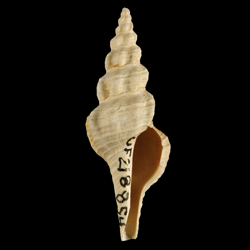 "Shell moderately large, slender, Fusus-like in outline and in general aspect. Whorls approximately 10. Nucleus large and well elevated, coiled between 2.5 and 2.75 times; first half of three-quarter turn largely submerged, the two succeeding volutions erect, elevated, the earlier the more inflated but of approximately the same diameter as the later turn. Line of demarcation between conch and protoconch sinuous, rather obscure; a couple of feeble and irregular axial wrinkles on the last quarter turn of the protoconch; spiral sculpture initiated at the beginning of the conch in the form of exceedingly faint sulci, 2 or 3 on the posterior portion of the whorl, that directly in front of the suture line the least feeble; true axials introduced within the first quarter turn of the conch, rather broad, rounded, slightly protractive, strongest medially, evanescent posteriorly; a low, broad peripheral cord gradually established within the last half of the first conchal turn and another, similar to it, halfway between the periphery and the anterior suture. General features of adult form and sculpture established within the first 4 whorls. Outline of adult whorls modified by very prominent undulatory axial ribs, most elevated peripherally, evanescent posteriorly but persistent to the anterior suture and well down upon the base of the body, 10 upon the later adult turns. Spiral sculpture absent for the most part upon the fasciole but well developed in front of it; primaries cordate, equally prominent upon the costal and intercostal areas, 2 or 3 upon the medial whorls, 4 or even 5 upon the later, and 7 upon the body, separated by wider interspaces in which fortuitous secondaries are in places introduced upon the spire and regularly upon the body of the adult; pillar evenly lirate, the anterior fasciole closely threaded with much finer and sharper lirae; posterior fasciole between one-third and one half as wide as the whorl, obscurely undulated by the axials, smooth or with 3 or 4 very fine and faint lirae on the anterior portion. Incremental sculpture unusually feeble. Margin raised directly in front of the suture, very closely appressed and undulated by the axials of the preceding volution in a manner common among some of the Fusidae and the Muricidae but extremely rare among the turritids. Aperture narrowly pyriform, rather abruptly constricted at the base of the body; outer lip expanded, simple within. Siphonal notch broad, moderately deep, symmetrically placed between the periphery and the suture. Inner margin of aperture gently concave, nonplicate. Parietal wall smoothly glazed. Anterior canal rather long, slender, almost straight, with parallel proximate margins.

Dimensions of immature individual: Height, 27.8 millimeters; maximum diameter, 9.6 millimeters. The adults are all in such bad shape that an immature form has been selected for figuring.

The Vicksburg servata with which this species has been confused in the synonymies is smaller, with distinct nuclear characters, less elevated and less undulatory axials, and a very fine and regular spiral threading upon the posterior fasciole and the spaces between the primaries. The Ballast Point specimens are probably distinct from both the Vicksburg and the Chipola. It is very difficult at first or even second glance to believe that this species is not a Fusinus. In outline, in the close appression of the whorls, and in the elevated, broadly undulating axials it is readily duplicated among the Fusidae, notably in Fusinus, but rarely among the Turritidae. The diagnostic character—the deep posterior sinus—is usually inconspicuous. The margin of the outer lip is rarely preserved intact, and the traces of the former extension of the sinus left in the incremental sculpture are unusually feeble.

The species is restricted in its known distribution to the Chipola fauna."