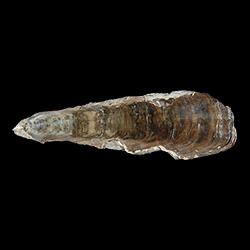 "Shell linguloid; elongated with the anterior extremity truncated; beaks obtuse and rounded at first, later becoming acute; lime depositing regularly throughout; surface polished, with distant marks of resting stages parallel to growth lines; other growth lines indistinct; sides of young shell nearly parallel or slightly wider in the middle; no punctate structure visible with high power; cardinal area in young shells distinct but small, grooved, not seen in older shells on account of their fragmentary nature; ventral valve with two nearly straight laminae, which diverge at a small angle; dorsal valve with a straight medial septum which does not quite reach to the posterior valve margin; no muscle scar visible in the adult shells; valve of young shell with the umbonal scar represented by a single, slight depression just in front of the beak; laterals by two scars separated by a short medial septum, and just in front of the umbonal scar; color of shell, which appears to be original, cream-white, yellowish brown or blackish.

The occurrence of this brachiopod in the Miocene is of more than usual interest as seeming to represent the sole example of the genus Glottidia in a fossil state. The above description is based on fragments of several adult individuals and upon a score or more young shells, generally under 5 mm. in length. The young shells were all found together in the sand contained in the closed valves of a large specimen of Pecten jeffersonius. They were accompanied by Modiolus pulchellus, Diplodonta yorkenisis and sea-urchin spines, probably belonging to Echinocardium orthonotum. This species is very distinct from the common Atlantic Glottidia audebarti Broderip (G. pyramidata Stm.) and shows much closer relationship with the Pacific G. albida Hinds. From G. audebarti the Miocene shell differs in having the lime secreted evenly through the shell, and in having the laminae of the ventral valve nearly straight and diverging at but a small angle. G. albida of the Pacific has more pointed beaks and a more ventricose shell, due to the three elevated ridges which radiate from the beaks.