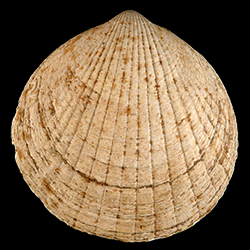 "Shell of moderate size for the genus, thick, heavy, rather tumid, subcircular to subovate in outline, in many specimens slightly produced obliquely. Posterior dorsal margin usually sloping a little more steeply than the anterior. Lateral margins broad and merging gradually into the arcuate base. Umbones subcentral or a little anterior, incurved, orthogyrate, acute at the tips, rounded, not very prominent. Normal external sculpture consisting of radiating sulci, 18 or 19 in number upon the medial portion of the types but ranging from 16 to 22 in other individuals, usually more closely spaced upon the posterior half of the shell than upon the anterior. Four additional sulci on each of the submargins of the types, but as many as 6 or 7 in other individuals, all of them, both upon the disk and the margins, persistent as a rule to the outer edge. Interlinear spaces usually flat upon the disk, occasionally rounded, the interspaces upon the submargins in many specimens raised and commonly rather steeply inclined toward the dorsal margin. Concentric sculpture restricted to incrementals, most prominent, as a rule, toward the ventral margin. Ligament area of moderate size, rather high, approximately symmetrical; sulci deep, 8 on each side in the type. Dental arch high, interrupted in all but the very young by the submergence of the ligament area. Teeth strong, 12 anterior and 12 posterior in the right valve, 14 anterior and 12 posterior in the left valve of the type; the number in the complete series about 15 to the side. Muscle scars conspicuous, the anterior slightly larger than the posterior, semi-elliptical or rounded conical in outline, the posterior rudely quadrilateral and feebly buttressed. Pallial line simple, distinct, rather distant from the margin. Interior of valve finely striated radially, especially just inside of the pallial line. Inner margins ornamented with a series of elevations, quadrate medially, trigonal distally.