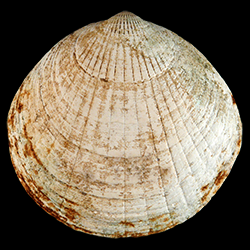 "Shell of moderate size for the group, moderately thick and heavy, and moderately inflated. Outline subcircular and approximately symmetric bilaterally in the young and adolescent, in many specimens quite strongly and obliquely produced posteriorly in the adults. Umbones rather low, rounded, acute at their apices, orthogyrate, and in the adults more or less anterior in position. Dorsal margins converging at an angle of 45° to 60°, the posterior margin generally more produced than the anterior. Anterior lateral margin very broadly rounded or obscurely truncate. Posterior lateral margin obscurely differentiated, as a rule, very short, rounded or obtusely truncate, the dorsal margin usually produced beyond the median horizontal. Base line arcuate, more strongly and more abruptly upcurved in front. than behind. External surface radially sulcate, the sulci linear and varying in number, as a rule between 20 and 30, inclined to become obsolete toward the margins, both the lateral and the ventral, most distinct upon the medial portion of the disk, usually more distinct and more closely spaced posteriorly than anteriorly. Concentric sculpture developed only in the shape of incrementals, most pronounced toward the ventral margins. Ligament area usually quite high and trigonal. Dental armature heavy. Dental arch high. Teeth strong, numerous, normally about 12 on either side, the anterior a little more elevated as a rule and more strongly arched than the posterior. Muscle scars very distinct, the anterior rounded, trigonal, the posterior rudely quadrate. Posterior buttress ex ceedingly feeble. Pallial line simple. Interior of disk faintly striated radially. Inner edge evenly crenate along the lateral and basal margins.