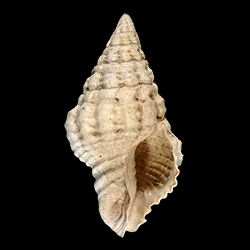 Remarks.--Latirus nosali is the first species of Latirus s.s. that is known from middle Pliocene deposits of Florida. Although most specimens have been collected from spoil, several of the specimens were collected from in situ from Petuch's (1982b) Unit 7, indicating the material to be from the Pinecrest beds of the Tamiami Formation.

The 14-16 axial ribs on the body whorl of L. nosali are smaller, more closely spaced, and more numerous than are the 8-9 more prominent ribs of the late Pliocene species L. stephensae (described hereafter) and the Pleistocene to Recent species L. cariniferus (Lamarck). The swollen band near the posterior suture of L. nosali is absent in L. stephensae and L. cariniferus, which have, instead, relatively flat sutural ramps (Bullock 1974) overlain by faint spiral threads. The 7 spiral cords on the body whorl and the absence of a parietal tooth distinguish L. nosali from the large Pleistocene species L. (Polygona) maxwelli Pilsbry, which has 9-10 spiral cords and a prominent parietal tooth.

The projected maximum length of 65 mm is an approximation extrapolated from the largest specimen (FSBC F 39512), which has a broken spire tip. The width of the umbilicus is more pronounced in some specimens than in others. The umbilicus of each of the larger (>50 mm) specimens is very wide, but the umbilicus of the 32.1 mm specimen is relatively wider than are those of the other specimens 36.0-47.1 mm in length.

Etymology.--The species is named for Adam Nosal, who has facilitated access to the APAC Mine for countless fossil collectors."

To access this description in its original formatting through the University of Florida Digital Collections, click here.