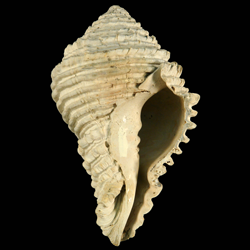 "Original description. — Shell massive with approximately eight post-nuclear whorls in the adult. Nucleus of 1.5 smooth, polished whorls, ornamentation beginning gradually with about nine axial nodes on each of the first six whorls. On the median whorls axial ornamentation reduced to small growth lines which, crossing the spiral cords, give rise to a scabrous appearance. Spiral ornamentation consisting of a series of strong cords, about 12 in number; three slightly stronger and bearing open spinelets in young individuals. The most posterior of these three semispinose cord immediately adjacent to the suture, the second at the shoulder, and the third at the base of the siphoned canal. In addition, two weaker ribs between the two posterior cords. Occasionally smaller intercalary riblets between the spiral cords but not invariably. Aperture elongate; outer lip crenulated by the spiral cords, with flaring notches corresponding to the three primary cords. The posterior notch forming a large channel. Inner lip with a heavy callus formed over the parietal wall and a strong siphonal fasciole. Columella bearing four plications diminishing in size from posterior to anterior, and the first very wide and the last almost obsolete.

Discussion. — This shell has only a slight constriction to a "waist" at the base of the body. It has three scabrous prominent spiral cords, one at the shoulder, a second forming the sutural collar, and a third immediately below the "waist." Below the last, one or more of the spirals on the back of the canal may also be scabrous. The number of smooth primary spiral cords on the body below the shoulder is usually six; and they are uniformly spaced. In the broad furrow between the shoulder and the sutural collar there are two secondary threads."