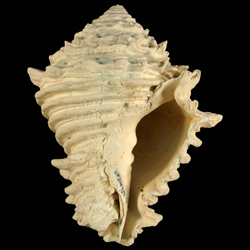 "This shell is large, shaggy, ponderous, biconic — the apical cone 85°, the body cone 50° — about eleven whorls, about the first five lost; the body, except for spines, tapering uniformly from the shoulder to the end of the canal with little or no waistlike contraction at the base of the body; seven equal squamous spiral cords from the shoulder cord to the bottom of the body; five more prominent squamous spirals pass across the back of the beak; above the shoulder there is a relatively flat area with two spiral threads; above this area is an upward-thrusting row of squamous spines up to about a centimeter high bordering the suture beyond; the suture is formed in a way to expose the first cord below the shoulder cord; the whorls of the spire progressively less spinose upward from the shoulder; on the beak five graduated squamous spiral cords, the largest at the top, with a secondary thread in the interstices; the aperture suboval, smooth within, the outer lip notched at the external cords; the inner lip a callus extending as a shield over the external cords, which shield folds at the top to form an anal notch; three transverse plicae on the arcuate columella, graduated in size, the largest above; the inner lip of the canal forming the flaring margin of a prominent, deeply perforated umbilicus. Height, 113 mm, width, 78 mm.

This species is similar to V. locklini in that the body is not constricted but differs from it since that shell has but four or five primary cords around the base of the body, exclusive of the shoulder cord, while this has five or six more squamous spirals with no prominent groove at the base of the body.

Discussion. — This shell is named for Mrs. Howard Schriner, whose extensive collection of Vasum deposited in the Paleontological Research Institution has made this study possible."