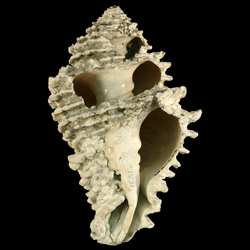 "This shell is large, ponderous, shaggy, biconic — 95° for the spire, 60° for the body — about 10 whorls, the first five lost; the body contracting to a "waist" at its base; at the shoulder there is a prominent row of outwardly flaring open spmes or scales about one centimeter long; below the shoulder a band of five equal and uniformly spaced strong spiral squamous cords, the grooves between being flat-bottomed with a single small thread; between this band and the shoulder a prominent groove with two spiral threads along its generally flat bottom; above the shoulder a flattish sloping surface with three spiral threads, other threads flaring out on each spine; a prominent upward-flaring squamous collar about one centi- meter high on the last whorl girdling the suture beyond; the suture formed just below the first body cord; the successive sutural exposures growing progressively less coarse to the decorticated apex; at the "waist" a prominent spiral groove with a secondary cord smooth to squamous and with two or three finer, wavy threads; below this "waist" four or five prominent squamous spirals over the beak, forming a shaggy skirt over the lower outline of the shell, between each pair of spirals a secondary cord; the ovate aperture lined with a smooth callus which flares over the parietal wall with a free edge, folds at the sutural collar, to form an anal notch, another strong notch at the shoulder cord, other notches along the lip at each of the body cords; along the inner lip of the beak a flaring edge, which with the terminus of the canal forms a wide, flaring umbilicus, deeply perforated; on the columella, three transverse folds, the strongest at the top and growing successively weaker toward the canal. Height, 122 mm, width, 90 mm.

This shell appears to be at the beginning of the gerontic stage, which is usually marked by coarser growth lines and a detached callus over the parietal wall.

Variations from the holotype exist both in size and detail of sculpture. The holotype is the largest so far seen by me. Some shells have six cords on the body. Some shells are less prominently squamous than the holotype. The separation of the shoulder cord, the prominent groove at the waist, the contraction at the waist, the more prominent shagginess of the spirals on the beak, and the stockiness of the shell are all fairly constant characters.

The chief differences between V. horridum and V. squamosum are that there are fewer and larger spines on the shoulder of the former, it has but four cords on the body, and there is a more pronounced contraction at the waist than in the latter. "