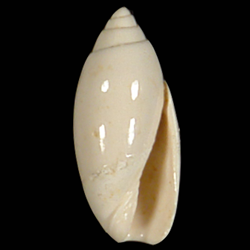 "Shell of moderate dimensions for the group, rudely elliptical in outline, smooth and very highly polished. Spire rather elevated, the whorls closely overlapping one another like a bandage. Body broadly and smoothly rounded. Whorls 5.5 in all, 4 of this number included in the conch. Initial whorl broad and full, immersed at the tip; succeeding half turn high, feebly convex. Dividing line between conch and protoconch indicated by a slight difference in the texture of the shell and by the abrupt initiation of the sutural channel. Postnuclear whorls of the spire trapezoidal in outline, increasing regularly and not very rapidly in diameter. Sutural channels very narrow, not undercutting the preceding volution, margined in front by the sharp edge of the succeeding turn. Incremental striae exceedingly feeble. Aperture narrow, cuneiform in outline, acutely angulated posteriorly. Outer lip thin, sharp, approximately vertical, slightly patulous anteriorly; posterior two-thirds of ultima free from callus, even at the posterior commissure. Basal coat of glaze cutting obliquely across from a point a little less than halfway from the posterior to the anterior extremity of the aperture, the labral margin parallel throughout its later extent with the outer arm of the siphonal notch. Body wall obscurely corrugated with 6 or 8 transverse sulci. Base of pillar reinforced with a narrow but heavy deposit of callus laid parallel to the obtuse pillar margin, bearing a few secondary sulci directed toward the siphonal notch but evanescing before reaching it. Anterior emargination very broad but shallow, approximately horizontal.

Olivella cofacorys is characterized by the rather obtusely rounded nucleus, the narrow sutural channel, which does not, as in the majority of the members of the group, undercut the preceding whorl, and by the entire absence of glaze upon the posterior portion of the ultima.

The likeness to Olivella sancti-dominici Maury from the Rio Gurabo is much closer than to any Olivella of the Alum Bluff group. The whorls that make up the spire of the Dominican species are slightly more tumid and less numerous by one than those of O. cofacorys.

The species is not uncommon at the single horizon at which it occurs."