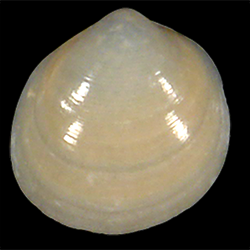 "Shell subovate, oblique, slightly ventricose, thin, destitute of ribs or radiating striae; white, covered with a pale brown epidermis darker towards the base and wrinkled at the ends; within striated, and of a yellow colour; margin entire or obsoletely serrated, whitish, with generally an oblong black or dark purple spot on the posterior side.

This shell has not the polish nor distinctly serated margin of C. serratum to which it is nearly allied; the striae are occasionally obsolete or only slightly serrate; the margin towards the anterior end, and the young shells are marked with angular fulvous spots, similar to the young of C. laevigaium and several other shells. Dr. S. G. Morton first received specimens of this species which he believed to be undescribed, and it is to him that I am indebted for the use of many individuals, from which the description has been drawn; and it is therefore with pleasure that I introduce the shell with his name. Numbers were taken alive in Long Island Sound by Mr. William R. Clapp; and Professor A. D. Bache lately presented specimens to the Academy which he procured on the coast of Rhode Island. This species has not been observed south of Long Island."