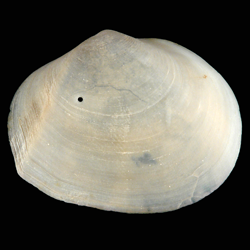 "Shell subovate, angulated at the anterior base, transversely wrinkled, and within slightly striated longitudinally.

Shell white, immaculate, ventricose; wrinkles distinct, and with obsolete, longitudinal striae: posterior slope near the hinge parallel to the base; posterior end obtusely rounded; anterior hinge slope rectilinear, oblique: anterior end rounded; fold rather profound, extending from the beak to the junction of the base, with the anterior end: base viewed from the disk of the right valve subrectilinear, but very much arcuated with the concavity of the shell: hinge teeth small, lateral teeth none: within longitudinally obsoletely striated: beak rather before the central.

This shell was handed me for examination by Professor Green, in whose cabinet the specimen is preserved: a right valve is in the collection of Mr. Hyde: In general outline, it resembles fig. 3, pl. 287 of Encycl. Meth."