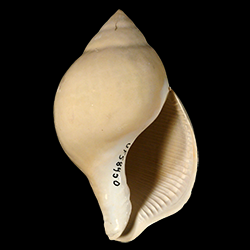 "Shell bulbiform, or imperfectly pear-shaped, ventricose, thin in substance; spire conical, made up of about six convex whorls; aperture about two-thirds the length of the shell, oval, and produced anteriorly into a (deflected) canal of moderate length; outer lip thin, notched below the sutural line, forming a prominent sinus, and crossed on its inner face by numerous parallel, raised (revolving) lines; columella conspicuously arched or flexed, with some five to seven oblique plaits, the lower two of which are much more prominent than the others; no umbilicus; general surface of shell smooth.

Length, two and half inches; width across the centre, somewhat more than an inch and a third.

This species appears at first sight very much like the Eocene M. pyrula, but may be readily distinguished by its greater ventricosity, the convexity of the whorls, and the absence of the sutural carination (or more properly, sub-angulation). The columellar plaits are also considerably more prominent in the Florida form.

As far as I am aware these are the only two species that can be properly included in the genus, which appears, consequently, to be extinct. Whether or not the modern Lagena, which so closely resembles it, is immediately related, remains to be determined."