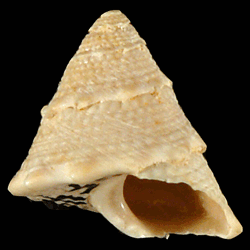 Shell small, elevated-trochiform, with flattened sides and base and seven or eight whorls; nucleus minute, the first two or three whorls flattened above, coiled in a single plane, then taking on the adult habit in the remainder of the shell; periphery keeled, the carina furnished with ten or twelve triangular, imbricate spinose projections, underneath which the suture is closely appressed; above, between the suture and the periphery, are five low spiral, beaded bands, between which are single smaller intercalary threads, all of which march straight around the whorl without fluctuation; on the base between the periphery and pillar are about eight beaded spirals, alternated in strength; across the spiral sculpture, obliquely, especially toward the apex, run well-marked but not lamellose incremental lines; pillar narrow, arched, with a faint groove behind it, terminating in one or two feeble tubercles; aperture rounded quadrate, outer lip thin, body with a wash of callus. Alt.11.5; max. diam. 11.0 mm.

This interesting little shell is without doubt the forerunner of the following species, but differs from it and from all the recent forms in the low rectilinear sculpture and the absence of any plications on the side of the whorl except at the periphery. The operculum is unknown."