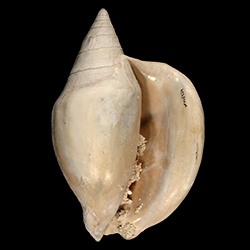 "Shell of the general habit of Strombus accipitrinus, thick, ponderous, and, barring the wing, oblong-fusiform, with an abruptly reflected base; spire elevated, somewhat less than one-half the length of the shell, and consisting of from eight to ten volutions; the whorls flattened, the upper slightly nodose along their basal margins; surface of the whorls ornamented with numerous elevated revolving lines, which alternate irregularly in size from twelve to fifteen on the larger whorls and are crossed at right angles by longitudinal faintly-waved creases or ridges, representing lines of growth; body-whorl slightly concave on the shoulder, and projected anteriorly into a symmetrically curved wing, which ascends to about the middle of the penultimate whorl of the spire, and whose furthest expansion corresponds approximately with the centre line of the shell; body-whorl faintly tuberculated on the shoulder, the seven or more tubercles continued as so many distinct ridges extending about half-way to the base, and showing a tendency in some specimens to develop into true nodes; surface of the shoulder covered with numerous slightly waved or crenulated concentric lines, which below the shoulder are replaced by broad regularly-placed bands (about fifteen or sixteen in number, and measuring about five to the inch), which, more especially on the expanded portion of the wing, can be clearly seen to be of a composite nature; wing very thick, thickest near the margin, and but faintly reflected; columellar surface covered with a thick deposit of callus, which extends nearly to the posterior apex of the recurved base.

Very abundant in the banks of the Caloosahatchie below Fort Thompson, where it is found from the water-line to the base of the Venus cancellata (Post-Pliocene) bed; I am not sure that we obtained any specimens from the latter deposit, but, doubtless, the species is also found there. Specimens despoiled of the wings have the form of Conorbis, and could readily be mistaken for giant species of that genus, especially as there is a slight sinual flexion in the lines of growth over the shoulder."