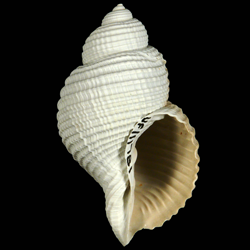 "Shell rather large, thin and fragile, turrited, and consists of 5 whorls. Nucleus smooth, flatly coiled. Following whorls rounded, strongly constricted at the profound, grooved suture. Spiral sculpture of equidistant, nearly flat-topped narrow bands (8 on the penultimate and 19 on the body whorl and canal), roughened by growth lines and poorly defined axials. Axial sculpture of weak ribs and closely crowded growth lines overrunning the surface and giving the shell a roughened but not a distinctly cancellate appearance. Aperture earshaped, slightly produced submedially. Outer lip thin, marked within with 15 carinate lirations, which are located opposite to the external spiral interspaces. Canal short, rather wide, and reflected. Posterior part of a parietal wall with a spiral, rounded ridge. Columellar lip marginally reflected and provided with 2 plications, anterior plication more oblique than posterior. A large perforation is behind the lower part of the columellar lip. Siphonal fasciole prominent, ornamented with 3 to 4 closely-set coarse spiral lines.

The new species is closely allied to Cancellaria venusta Tuomey and Holmes, a species occurring both in the Waccamaw and Caloosahatchee Pliocene, but differs from this species in having a much larger shell, much more inflated and tabulated early spire whorls, and in lacking the coarse cancellate ornamentation possessed by the Pliocene species.