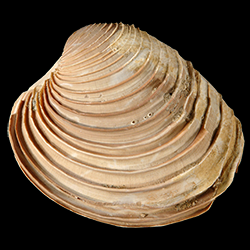 This species was originally figured in Dall (1900) without a written description.

Shell of moderate size, subtrigonal, inflated, with prominent decurved beaks and a large cordate lunule; posterior dorsal area large, laterally keeled, with coarse concentric striation, the dorsal margin of the right valve somewhat overlapping that of the left; sculpture of numerous rather distant, thick, elevated, concentric recurved ribs, which on the posterior part of the disk are bent downward and expanded; the interspaces are closely, sharply, deeply, concentrically striated, so that the interspaces of the striae are almost lamellose; owing to the general slight decortication the internal radial structure of the shell is usually more or less visible, though in a perfectly intact specimen it would be completely hidden; hinge as in the other species, the rugose area in the adult large and prominent; pallial line with a short angular sinus; the inner anterior and basal margins of the valves finely crenulate. Height 70, length 88, diameter 50 mm.

This fine species is named in honor of D. W. Langdon, Jr., who has done much work on our Southern Tertiary.

The species is distinguished by its heavy, prominent, recurved concentric ribbing from any of the other species of the genus, recalling in this respect some of the forms of Chione. It has so far been obtained only from the lower or Chipolan bed at Alum Bluff, where it is rather abundant."