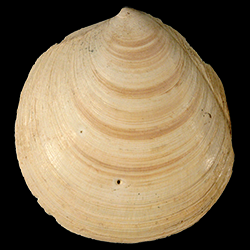 This species was originally figured in Dall (1898) without a written description.

"Pliocene of the Caloosahatchie and Shell Creek, Florida; Willcox, Dall, and Burns.

The lunule is better developed in the older specimens and more in the right than in the left valve. Some specimens have the right valve less convex than the left. The species is very like P. (Miltha) Childreni Gray, but is proportionally more elevated, with a more delicate hinge and smaller muscular impressions. In the Pacific species, when there is a perceptible difference in the convexity of the valves, it is the left one which is flatter, and it is a curious coincidence that similar differences occur between the Atlantic and Pacific species of Tellidora, also inequivalve shells."