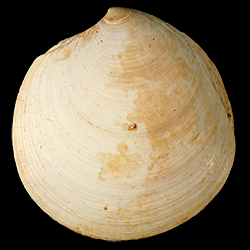 "Oligocene of the Chipola River, Florida; of the lower bed at Alum Bluff, Chattahoochee River, Florida, and of Hawkinsville, Georgia; Dall and Burns.

The figure of this species is restored from a number of fragments which give practically all the characters except the hinge of the left valve. It is a large, very compressed form belonging in group B."