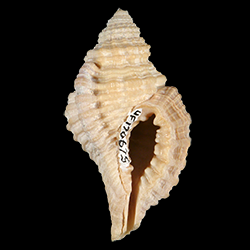 For information on the modern distribution of the species (as Cymatium krebsii), see Malacolog.

"Description. Shell medium in size, reaching 73 mm. (about 3 inches) in length, solid, imperforate and strongly sculptured. Color entirely white or white with spiral bands of yellowish brown in the grooves between the cords. Interior of the aperture white. Postembryonic whorls 7 and strongly convex. Spire extended and produced at an angle of about 37°. Aperture nearly vertical and narrowly elliptical. Outer lip greatly thickened when a varix is produced. Parietal lip rather narrow and heavily glazed. On the outer lip there are or 7 strong denticles which extend well into the aperture. On the inner lip, at the upper end there is a strong lamella which forms the margin of the anal canal. On the columella and well within the aperture there are two large and somewhat irregular lamellae. In addition, between the anal lamella and the base of the siphonal canal there are numerous and very fine thread-like lamellae. Columella slightly arched inwardly, with its base continuing into the parietal margin of the siphonal canal. Siphonal canal narrow, rather short and curved upward. Suture slightly indented. Sculpture consisting of from 5 to 7 strong, nodulose varices. Between the varices there are 5 or 6 somewhat irregular and strongly nodulose, axial ridges. These are crossed by 6 or 7 heavy spiral cords. Between these cords there are three subequal but rather fine threadlike cords. Periostracum thin, deciduous, roughened and golden-brown in color. Operculum unguiculate with a marginal nucleus and numerous concentric growth lines. Embryonic whorls 3.5 to 4, smooth, straw-yellow in color, narrow, extended and with microscopic axial striae.

Types. The holotype of C. krebsii Morch is probably in the Universitetets Zoologiske Museum, Kobenhavn, Denmark. There are two paratypes from the Swift Collection in the Academy of Natural Sciences Philadelphia, no. 42605. The holotype of C. pharcidum Dall is in the United States National Museum, no. 94887. The type locality is here restricted to St. Thomas, Virgin Islands, the locality from which Swift's material came.

Remarks. Cymatium krebsii Morch is a very rare species to judge by the few specimens in museum collections. It differs from C. nicobaricum in the shape of the aperture and the lack of color in the aperture, though in general sculptural characters it appears to be quite close to that species. From C. pileare Linne it differs in general shape and in the lack of color in the aperture. In addition, it is far more nodulose. From both C nicobaricum and C. pileare it differs by having two rather large columellar lamellae. See also Remarks under C. gemmatum Reeve.

Cymatium krebsii is apparently related to C. corrugatum Lamarck of the Eastern Atlantic, both species agreeing in the approximate shape of the more or less vertical and narrow, elliptical aperture. In both species the aperture is white and both have the large columellar lamellae. C. krebsii differs from corrugatum in being somewhat smaller and in being far more nodulose.

Range. From Palm Beach County, Florida to Dry Tortugas and south through the West Indies."