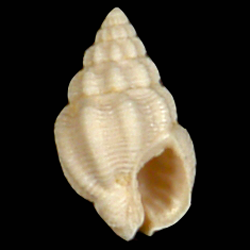 "Shell small, moderately heavy, ovate-conic in outline. Aperture approximately one-half the total height. Whorls of the conch 5, those of the spire somewhat compressed laterally, the body broadly rounded and abruptly constricted at the basal sulcus. Sutures impressed and finely undulated by the costals of the preceding volution. Protoconch small, smooth, shining, thrice coiled, the initial turn minute, immersed at the tip, the two succeeding volutions well rounded and increasing rather rapidly in both diameter and height. Opening of conch marked by the appearance of the axial sculpture. Axials rather narrow, obtusely rounded, persistent from suture to suture, and, on the body whorl, to the basal sulcus, expanding slightly directly behind the anterior suture and on the medial portion of the body, subequal and subequispaced though slightly narrower and more widely spaced on the body than on the spire, from 7 to 9 in number on each of the later whorls. Intercostal areas concave, not quite so wide, as a rule, as the costals on the whorls of the spire but a little wider than those on the body. Spirals crowded, somewhat flattened, unequal, tending to alternate on the later whorls, overriding the costals and slightly expanding on their summits; commonly 4 approximately equal spirals on the earliest whorls; the anterior spirals developing into the primaries of the later volutions; a single secondary intercalated between each of the primaries on the later turns; 3 or 4 secondaries between the posterior primary and the suture line and 1 or 2 between the anterior primary and the suture; medial portion of body of typical forms girded with 4 equal, closely spaced Secondaries, the basal portion with 4 or 5 slightly more prominent lirae, usually without intercalated secondaries. Anterior fascicle wide, threaded with half a dozen linearly spaced, rather coarse lirae. Aperture broadly lenticular, acutely angulated at the posterior commissure. Outer lip varicose a little behind the margin, sharp-edged, lirate within; usually 5 or 6 subequal lirations developed, disposed at subequal intervals from the commissure to the anterior canal, frequently with shorter secondaries intercalated. Curvature of inner wall of aperture higher than that of the outer; constriction at base of body abrupt. Parietal and pillar wash heavy, the outer edge sharply defined and forming a broad arc from the commissure to the canal; one or more amorphous denticles developed on the posterior portion of the body wall of the adults and on the pillar. Margin of pillar sharply pinched, anterior canal short, recurved, broadly and deeply emarginate.

Uzita anisonema has about the same dimensions as U. cinclis and U. dasynema. The outline of the spire is less regularly conic, however, than in either of the two other species, the axials are broader, and the spirals are more closely crowded and usually alternate in size.

Some of the smaller, more slender individuals referred to Uzita consensa (Ravenel) from the late Tertiary and Recent southeast coast faunas are similar to U. anisonema. The group of half a dozen related Chipola species, of which U. anisonema is one, possibly includes antecedent forms of U. consensa (Ravenel), U. consensoides (Olsson) (pl. LI, fig. 23), and of the larger, shouldered U. ambigua (Montagu)."