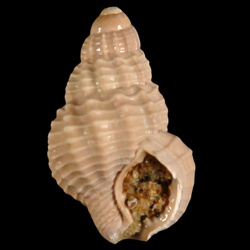 "Shell small for the genus, rather heavy, irregularly elongate-conic in outline. Whorls of spire broadly rounded, the body abruptly constricted at the base, the contour obscured on all the later volutions by the heavy axial ribbing. Postnuclear whorls only 3.5 in number. Nucleus large, obtuse, smooth, highly polished, including 4 complete revolutions; initial turn of the protoconch minute, flattened behind, almost entirely submerged in the succeeding whorl; remaining whorls of the protoconch broadly convex, increasing rapidly both in height and diameter; final whorl constricted at the anterior suture as well as at the posterior; a couple of very narrow, almost vertical axial riblets commonly developed on the last quarter turn of the protoconch, while a third and similar riblet marks the boundary line between conch and protoconch. Both the true axial and the spiral sculpture initiated at the beginning of the conch. Axials narrow, acute, vertical or feebly retractive, obtusely rounded, tending to weaken at the posterior suture but persisting with uniform strength to the anterior suture and well down on the base of the body; 12 on the earliest whorl of the conch, 10 on the later volutions, including the terminal varix, for the most part regular and separated by slightly wider concave interaxials. Spiral sculpture of narrow, flattened lirae separated by squarely channeled interspirals, tending to expand slightly upon the summits of the ribs, commonly 5 on the penultimate whorl and 13 upon the body; the posterior spiral cut off from the suture and from the spiral in front of it by interspaces of double its own width; the other 4 spirals upon the penultimate whorl and those upon the medial portion of the body separated by channels of equal or less width than their own; the 7 spirals upon the base of the body finer and even more regular in size and spacing than those behind them. Sulcus at the base of the body not sharply defined. Fascicle threaded with about half a dozen not very regular lirae. Sutures feebly impressed, undulated in harmony with the costals of the preceding whorl. Aperture broadly and obliquely lenticular in outline, acutely angulated posteriorly, approximately half as long as the entire conch. Labrum broadly and symmetrically arched from the commissure to the entrance to the anterior canal, rudely varicose a short distance behind the margin, the margin itself sharp and simple; inner lirae about 10, not persistent to the outer edge though produced within the throat, the posterior threads often more prominent and less regular in size and spacing than the anterior, the foremost lira more elevated than those behind it and set at the entrance to the canal. Labium deeply excavated at the base of the body. Parietal wall and pillar heavily glazed, the margin of the reverted callus acute and broadly arcuate; a feeble tooth occasionally developed directly in front of the commissure and on the pillar and less frequently on the intermediate area. Margin of pillar acute. Anterior canal short and sharply recurved. Terminal notch U-shaped, obliquely directed, the sinuous extremity of the fascicle forming the inner arm and the base of the U and the produced posterior margin of the fascicle the outer arm.

U. nanna and U. watsoni (Maury) are closely allied. The nuclear characters of these two forms are strikingly similar, but in nanna there is one more postnuclear whorl, the axials are much broader, more prominent, and less numerous (watsoni has 14 or 15 upon the later whorls), and the spiral sculpture is stronger."