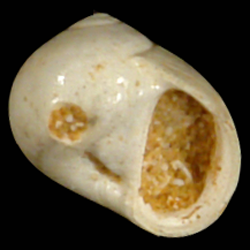 "Older Miocene of the Chipola beds at Ten-Mile Creek and on the Chipola River, one mile from Bailey's Ferry, and in the lower bed at Alum Bluff, Calhoun County, Florida.

Shell of four well-rounded whorls, with the suture well marked and the surface smooth, except for lines of growth which are sometimes slightly elevated near the suture; male with the suture less impressed and the spire more evenly sloping than in the other sex; spire slightly less elevated than in N. permunda; aperture with a thick body-callus continuous with the umbilical callus; the latter in N. permunda is coiled on the middle of the umbilical wall, with a space between it and the antecedent whorl; in N. alticallosa the callus fills the upper two-thirds of the umbilicus completely, and sometimes nearly reaches the umbilical carina, which last is less sharply defined than in N. permunda, and consequently the aperture at the base of the pillar is somewhat less angular and effuse than in that species. Alt. of shell 18; max. diam. 18 mm.

The subsutural callus in this species is generally separated from the outer lip at the body by an obscure groove, and the callus here projects forward on the body beyond the lip. The operculum is unknown."