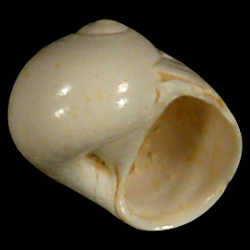 "Shell large for the subgenus, rather heavy, subconical. Whorls approximately 4 in number, 3.75 in the holotype. Protoconch of 1.5 turns, smooth, highly polished, and immersed except for the flattened posterior surface. Initiation of conch marked by the more porcellanous texture and the development of incremental striations. Whorls of conch increasing rapidly in size, somewhat obliquely coiled so that toward the aperture a progressively larger part of the whorl is exposed; whorls obliquely flattened in front of the posterior suture; the body obtusely carinated at the periphery. Base more or less flattened between the peripheral and umbilical keels. Surface incrementally striated. Aperture auriculate, broader anteriorly. Outer lip asymmetrically rounded, expanding in front. Columellar margin slightly oblique. Parietal wash very heavy, cut off from the labrum by a shallow sulcus, thickening toward the umbilicus, which, in the adult, it nearly or entirely fills, leaving at most only a narrow chink along the anterior surface. Umbilical keel obtuse, concealed in its posterior extent by the callus; a sickle-shaped area exposed in front, the broader surface at the apertural face.

Natica platabasis was included by Dall under N. floridana Dall. The type of his species came from the Ballast Point silex beds and is a smaller, more globose form, with little or no trace of either a basal or an umbilical carina. The very young of the Chipola species are equally rounded, but they have a flattened spire. The suture line at the aperture of N. platabasis drops forward a little more than it does in N. floridana, but the spire is distinctly higher in the adult of the latter than in the young of the former. Dall noted the wide difference in outline in his floridana, and considered it as a sexual variation, but in several hundred individuals examined from the Chipola all of the adults are more or less obtusely angulated at the periphery and flattened on the base, while none of the forms examined from Ballast Point show any trace of the development of either a peripheral or umbilical angulation.

The species is common in the Chipola formation in the vicinity of Baileys Ferry and far from rare in the lower bed at Alum Bluff. It has not been collected at the higher horizons.

The dimensions of N. platabasis exceed those of typical Tectonatica."