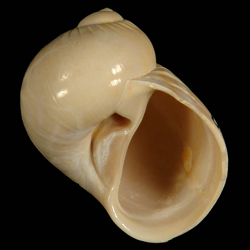 "'Conrad proposed for the Miocene fossil the name of N. plicatella, which may be used in a varietal sense to cover the older Miocene forms, in which, though the shells are absolutely identical, the operculum differs slightly from that of the newer Miocene, Pliocene, and Recent shells. The latter has about ten channeled, deep grooves, separating as many flattened, subequal ribs, which become narrower and more keeled toward the outer margin of the operculum. The central portion of the latter has an irregular, little-elevated callous area. In the operculum of the variety plicatella, as here restricted, the central callus is more elevated, with its margin limited by a conspicuous groove, while another similar groove separate the outermost rib from those inside from it. This character may not be constant, but until this is shown it would seem advisable to retain the varietal name, notwithstanding the shells offer no differential characters. We have a somewhat similar case in the recent Fasciolaria princeps of California and F. gigantea Kiener of Florida. The shells cannot be differentiated, but the opercula are markedly unlike.' - Dall, 1892.

Conrad's species was founded on the shells figured by Emmons and Tuomey and Holmes under the name N. canrena Lamarck. The form developed in the Miocene of the Carolinas is identical with the Recent N. canrena both in the characters of the shell and of the operculum, and for that reason Conrad's N. plicatella must be considered as the exact synonym of N. canrena. Natica precursor is consistently smaller than N. canrena and differs in the character of the operculum. In individuals of the same size there are 4 component volutions in N. precursor and only 3.25 in N. canrena. The nucleus is more depressed in the former, and the umbilical rib more widely separated anteriorly from the umbilical wall. These constant disparities in the shells of N. precursor and N. canrena together with the unlike opercula seem to warrant the specific separation of the two forms, although there is no doubt of their intimate genetic relationship."