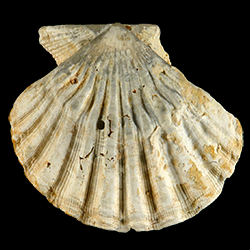 This is an interesting species, peculiar from its small size and the abruptness of its knuckle-like undulations. Some specimens, however, are but little undulated, and the mutations are much the same as occur in other species of the section.

The following species, while they are related by sculpture, form, and conchological character to the Nodipecten type, are not known to form nodules; the ribs may be slightly tumid at intervals or periodically undulated, but there are no hollow bullae, as in the more typical forms. But these characters are precisely those of the non-nodulous varieties of the nodulous species, and so I feel justified in including them in this section."