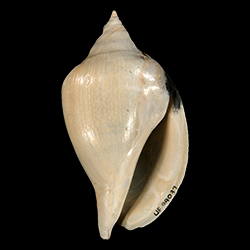 Shell large, solid, many-whorled; in the very young (Fig. 5) smooth and polished, except for incremental lines and a few faintly impressed spiral lines anteriorly; nucleus small, polished, glassy, not differentiated from the rest of the shell; early whorls with a very distinct, not channelled suture; the whorl in front of it slightly turrited; each whorl after the third has three slightly elevated, narrow, rounded varices, somewhat irregularly spaced, so that they do not follow each other continuously down the slope of the spire; about the end of the eighth whorl the posterior edge of the outside whorl begins to be prolonged backward more and more as the shell grows, so that the suture thus formed makes an irregular spiral line ascending the spire over the antecedent whorls until by about the tenth turn the whole of the spire is enveloped, as well as any barnacles, vermetus, or other semiparasitic growth which may have become attached to the surface of the spire; the anterior part of the shell has the shape of Leiorhynus, the pillar is rather thick and slightly recurved, with a moderately distinct fasciole; the canal moderately wide, shorter than the pillar; the outer lip simple, sharp, a little thickened at the resting stages, but not lirate internally; body with a moderate callus, which at the resting-stages is considerably enlarged, so that when the whorl comes to grow over it (as it is not absorbed) it produces an irregularity somewhat like a varix; the whorls are ovately rounded, smooth, except for occasional transverse undulations due to irregularities of growth, and polished; no indications of color-pattern have been observed.

The adolescent form (Figs. 5 a, 5 b) a good deal resembles a Strombus, except that the anterior sulcus of the outer lip behind the canal is absent or represented only by the faintest wave in the margin; the spire is entirely enveloped by the backward prolongation of the last whorl, except at the tip, where the envelope is usually a little eroded or defective; there appears to be a resting stage at every two-thirds of a revolution of the whorl around the axis, for which reason, looking down on the spire, the outline of the shell transverse to the axis is subtriangular or three-sided; the outer lip is simple, rather sharp-edged, and very slightly, if at all, recurved; it extends backward to the tip of the spire, near which it recedes somewhat from its parallelism with the axis; at the shoulder, also, it is slightly excavated and thickened; the body is smooth, with a moderate callus, which becomes thicker near the shoulder; at the shoulder, in front of the excavation above noted, it becomes very thick, and is continued on to the spire parallel with the outer lip, and very near it, so that between the two is a narrow, flexuous groove of considerable depth; when the shell begins to grow again the whorl is carried over this ridge, which is not absorbed, and the surface is thus rendered, as it were, varicose; the canal is short, strongly recurved, with a remarkably deep siphonal sulcus, so that the end of the pillar stands forward in a marked way; on the shoulder, halfway around the shell, is an ill-defined, narrow ridge, which ceases a little way behind the lip. The dimensions of the figured specimen are: Lon. 68.0; max. lat. 35.0 mm.

The adult form differs from the adolescent by the disproportionate strength of the ridge at the shoulder, by which the surface behind the ridge has become flattish as in a Cassis, but more irregular, and the width at the shoulder has increased in proportion to the total length. No entirely complete specimen of the adult has been found, but from the numerous fragments the proportions can be approximately determined. The max. diam. is 74.0, and the length about 110.0 mm., of which 15.0 mm. are behind the shoulder, while, in the specimen only 68.0 mm. long, there are 17.0 mm. of length behind the shoulder.

This species appears abundantly, though in a poor state of preservation, in the lower bed at Alum Bluff, and in the Chipola beds to the westward. The group in America would seem to be characteristic of the lower beds of the Southern Miocene, as far as our present knowledge permits us to judge.

I have observed that, occasionally, the ridge on the shoulder in young specimens is represented by a nodule rather than a ridge."