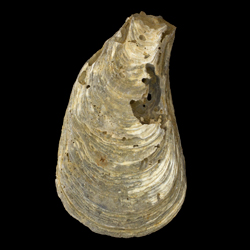 A large and handsomely plicated oyster, having considerable resemblance to O. compressirostra of Say, but the beaks in that species are very small and compressed, whilst in the former they are broad and prominent, and the shell attains a greater size and thickness with an approach to a falcate form.

Numbers were thrown up in excavating the Santee canal, and from its abundance in South Carolina, I have given the specific name Carolinensis. As I have not seen it in situ, and am ignorent [sic] of its accompanying fossils, I cannot positively refer it to the Middle Tertiary, to which it probably belongs."