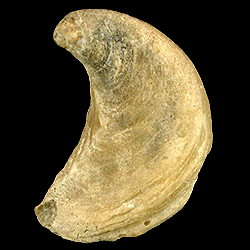 "Shell of medium size, trigono-falcate. Right valve much smaller than the left, flattened and sculptured only with concentric laminae. Left valve also compressed but not so much so as the right; sculptured with concentric laminae and with radial lirae; laminae worn down on all individuals but, in fresh specimens, probably free-edged and ruffled, as in Ostrea disparilis; radial liration irregular, strongest near the beak, restricted to the left valve. Beaks very narrow, produced and bent strongly backward. Ligament groove also very narrow, elongated parallel to the anterior dorsal margin. Posterior dorsal margin thickened and denticulate in the right valve and, in both right and left valves, denticulate along the anterior margin almost halfway down to the base. Single muscle scar obliquely pyriform, the narrowed posterior portion direct backward.

Holotype, paired valves: U.S. National Museum No. 559872. Topotypes, 6 sets of paired valves and one single right valve: U.S. National Museum No. 559873.Ostrea coxi is remarkable for the very narrow curved beaks and the discrepancy between the two valves. The sculpture pattern of both the right and the left valves is similar to that of Ostrea disparilis Conrad with which it is associated, but the outline of the dorsal half of the shell is distinct from the usual oval outline of O. disparilis."