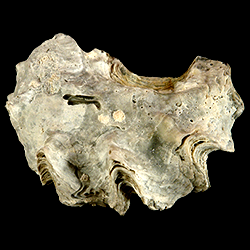 "Shell of medium size, broadly falcate, attached by only a small area on the left umbone. Valves subequal, the right valve a little smaller, more compressed and less strongly rippled than the left. Anterior and ventral margins forming a broad arc, the posterior lateral margin rather strongly concave. Marginal folds deep, confined in some individuals to the outer arc, in other individuals originating in the umbonal area; average number 5 or 6. Concentric sculpture feeble, incremental only. Possibly a crude radial cording may be developed, but only faint traces are discernable on the weathered surfaces. Ligament area small, low, flattened, depressed medially in the left valve. Inner marginal denticulations very fine, extending along the inner posterior lateral margin and at least a third of the way down the inner surface of the anterior lateral and ventral margin. Muscle scar relatively large, pyriform, posterior, distinct.

Ostrea locklini has not been recognized in the outcrop.

The species is named in honor of the donor, Mr. Charles R. Locklin."