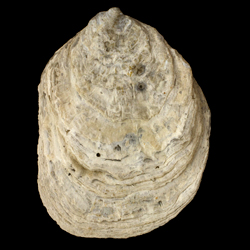 "Shell of medium size, inequivalve, the left valve slightly convex and externally strongly or weakly sculptured, the right valve flat to depressed, smoothish. Outline of shell (especially if viewed from the inside) is obliquely fan-shaped with the posterior-ventral corner produced and broadly flaring; generally also the posterior side may show a shallow indentation at its mid-zone so that the posterior-dorsal edge was slightly winged. Sculpture of left valve variable, from moderately strong to weak, wrinkle-like radial riblets, frequently cut by evenly spaced, concentric, raised shell edges. Upper valve flat to medially depressed, smooth or sculptured merely with spaced concentrics. Hinge area obliquely trigonal with the small beak turned or twisted posteriorly, the resilium quite deep, the edges of the hinge area bordered on each side by a groove which in the left valve passes down into the interior as a short, marginal, crenulated furrow. Lateral-dorsal margins of the right valve heavier and heavily crenulated.

We have specimens of this species from Hickey Creek, Olga, Florida, ANSP 18966, Type; and from Snell Island, St. Petersburg, the latter given to us by George H. Cox, M.D., of New Glasgow, Nova Scotia. Superficially, these shells resemble a small form of O. virginica but differ by their more flaring sides and fan-shaped valves; also by the presence of small crenulations along the lateral margins. Compared with foreign oysters, some of the valves from Snell Island bear a very close resemblance to the figures of Ostrea digitalina Dubois from the European Miocene (Aquitanian and Vienna basins).