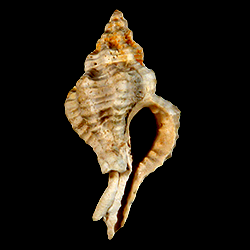 "Shell rather small, biconic. Aperture more than half as long as the entire shell. Spire obscurely scalariform, the posterior ramp broken by the axial sculpture; whorls probably 7 in number in the perfect adult, regularly and rapidly increasing in diameter. Body relatively large, inflated medially, abruptly constricted into the rather slender pillar. Volutions closely appressed, the posterior margin transgressing at the varices upon the preceding whorl. Sutures inconspicuous and irregular. Protoconch rather small, smooth, highly polished, subcylindrical; initial whorl strongly inflated medially, immersed at the tip; succeeding volution also convex, though flattening on the last quarter turn; close of protoconch indicated by a slight thickening of the shell. Axials 6, narrow, elevated, sharply rounded on their summits, equal and equispaced, retractive, the varices continuous, each series performing about half a revolution around the axis of the shell, persistent from the earliest whorl of the conch to the anterior fascicle; intervarical areas broadly concave, wider than the varices excepting on the base of the body whorl, where they wedge out; intervarical depressions deepest toward the posterior suture and to the right of the varix, where a curious little pocket is formed a character perceptible on the third whorl of the conch and strengthening with the growth of the shell. Spirals coarsely threading the entire conch and equally prominent on the axials and the interaxials; primaries 3 on the whorls of the spire and the medial portion of the body, 3 on the base of the body, and 3 or 4 on the pillar, regular in size and spacing, elevated, obtusely A-shaped except on the base of the body and the pillar, where they are less elevated and more rounded; separated for the most part by narrower V-shaped channels, though on the base of the body and the pillar the interspaces are flattened and of approximately the same width as the spirals; one and, on the later whorls, 2 secondaries intercalated between the posterior primary and the suture; secondary spirals may also be intercalated on the base of the body and the pillar; the primary outlining the shoulder and one or more body spirals spinose at the intersection with the axials. Pillar formed by the closely appressed, overlapping varices, the anterior fascicle also bearing the record of successive canals, 1 to each varix. Aperture rather narrow, spatulate, obtusely angulated posteriorly. Labrum varicated a little behind the thin crenate margin, lirate within. Labium excavated at the base of the body, heavily glazed, smooth except for a few rugae on the pillar near the entrance to the canal. Anterior canal of approximately the same length as the wider opening behind it; narrow, with parallel, proximate margins. Anterior fascicle arcuate, built up from the extremities of the successive terminal varices.

In Muricopsis laccopoia, the varices are arranged in a continuous series which break down the shoulder ramp into small intercostal depressions, usually threaded with 2 secondaries. A single individual collected from the Oak Grove is a juvenile, but it is apparently identical with the Chipola individuals. The individual from the Shoal River is also a juvenile and probably referable to an analogous but not identical species."