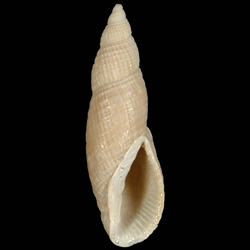 "Shell small, five-whorled; nucleus smooth, of a whorl and a half, rapidly increasing, the tip involute; sculpture cancellate, composed of numerous strong, even, transverse costae, with narrower interspaces crossed by (on the whorl before the last) about seven strong and an equal number of finer intercalary threads which descend into the interspaces and override the costae without nodulation at the intersections; the base has similar sculpture, but the costae become obsolete as they advance toward the canal; the suture is distinct, but not channelled; there is no presutural band or sinus; the aperture is rather long and narrow; the outer lip is slightly thickened, but hardly reflected; behind it there seems to be a sort of varix made by a slight thickening of the shell; the outer lip is internally lirate for a short distance near its edge; the canal is shallow and not constricted, it forms no fasciole; inner lip with a slight glaze. Lon. of the specimen figured 13.0 ; max. diam. 4.5 mm.

Pliocene of the Caloosahatchie beds, collected by the writer.

The specimen has lost the whole of the last whorl except a small triangular piece of the outer lip near the suture. It is probable that the figure represents a longer canal than would have been present if the last whorl had never been formed, judging by the lines of growth on the remaining basal part of the penultimate whorl."

"Pliocene of the Caloosahatchie and Shell Creek, Dall and Willcox.

Much to my satisfaction, among the shells presented by Mr. Willcox to the National Museum in 1891, collected by him at Shell Creek, Florida, a mature specimen of this singular form turned up. This is a good deal smaller than the Caloosahatchie specimen would have been if perfect, but presents the characters sufficiently, and has been figured. It measures 17.5 mm. long, the aperture 9.0 mm. and the maximum diameter is 6.0 mm. The discovery of the entire shell, unfortunately, does not clear up its systematic relations. It proves to have two plaits, extremely oblique, a lirate, patulous outer lip, a canal so short, wide and straight as to be hardly recognizable as such. From the mitras of the section Mauritia it differs by its paucity of plaits, their obliquity, and the absence of a recurved canal. The latter is also present in Dibaphus edentulus. Perhaps this species may be regarded as most nearly allied to Mitra. It has not, so far as known, any recent analogue."